The “Big Two” in political communication: The effects of attacking and defending politicians’ leadership or morality 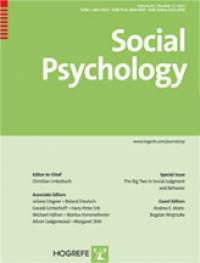 In two experimental studies (conducted in Britain and Italy), participants read about a politician answering to leadership- versus morality-related allegations using either downward counterfactuals (“things could have been worse, if ...”) or upward counterfactuals (“things could have been better, if ...”). Downward messages increased the perception of the politician’s leadership, while both downward and upward messages increased morality perception. Political sophistication moderated the effect of message direction, with downward messages increasing perceived morality in low sophisticates and upward messages increasing perceived morality in high sophisticates. In the latter group, the acknowledgment of an intent to take responsibility mediated morality judgment. Results were consistent across different countries, highlighting previously unexplored effects of communication on the perception of the “Big Two” dimensions.