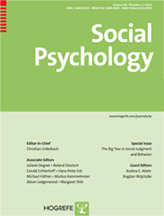 has been just accepted for publication in Social Psychology.