Juries in Italy: Legal and extra-legal norms in sentencing 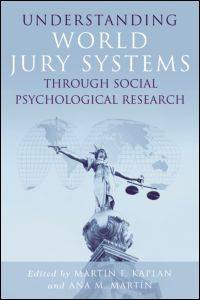 n the Italian judicial system there are both mixed and non-mixed juries. Mixed juries are composed by six laymen, drawn from among citizens with at least a secondary school diploma, and by two trained judges. These juries pass judgment for the most severe crimes only, that is, crimes punished with a 24-year sentence or more. Non-mixed juries, on the other hand, are composed of three trained judges and pass judgement for less severe crimes. A mixed jury is also found in juvenile courts, whose members are two trained judges and two experts chosen among professionals who are competent in juvenile deviance (e.g. psychologists, teachers, and sociologists). In the present chapter, we will focus on how juries refer to legal and social norms in their activity. In case evaluation, both lay and trained judges are likely to set the actual behaviour of case protagonists against how the same were expected to behave. However, what is expected according to social norms may sometimes differ from what is expected according to legal norms. In addition, expectations may differ from one juror to another, leading to possible conflicts in jury decision-making. With specific reference to juvenile courts, it will again be stressed how different judges may focus on different aspects of a judicial case, to the effect of orienting the sentence either toward the prevention of crime, or the promotion of the juvenile defendant. Thus, the two core issues addressed will be (a) the tension between legal and social norms, and (b) adjudication based on the norm of crime prevention (general welfare) vs. the welfare of the juvenile defendant (individuation). Social psychological knowledge will be applied to evaluating these issues.